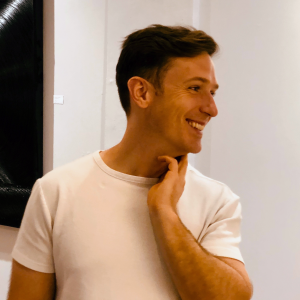 In early 2019, the Center for Civic Design began meeting with individuals who had become American citizens within the last five years. Eventually, they spoke with 36 participants from over 20 countries. The meetings began with traditional interviews, but ended by asking the participant to engage in a short drawing activity. The two methods revealed many insights.

The drawing you see was completed by a participant immediately following the interview. 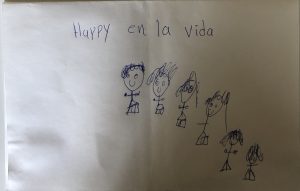 A citizen who had come illegally from Mexico drew six people on his paper, adding “Happy en la vida”. This signified his family and how he now knows he won’t be taken away from them. Now it was safe to move forward with his life. He also said that the people represent those he works with. He talked about how in his restaurants there are such diverse people all working hard and getting along.

Christopher Patten is Design Researcher at the Center for Civic Design in the USA. He will be hosting a session about designing tools that connect election officials and immigrant communities at the International Design in Government Conference.

What else can you expect at the conference?

Register for the International Design in Government Conference

This website is part of the Gebruiker Centraal community, ment to be used for international events.

These events are a collaboration out of the International Design in Government Community Programme.